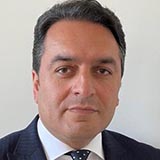 Professor Kalbassi is an experienced and highly qualified consultant in Colorectal, Minimally invasive and General surgery.

He is Ireland’s representative to the Pelvic Floor Society an affiliate of the Association of Coloproctology of Great Britain and Ireland.

He is an associate Clinical Professor in Surgery and Surgical specialties at UCD School of Medicine, University College Dublin. He also is a postgraduate trainer/ faculty at the Royal College of Surgeons in Ireland involved in regular postgraduate training.

Professor Kalbassi was educated at Wesley College Dublin and the Royal College of surgeons in Ireland. He completed his specialist surgical training in Ireland and England. He is accredited in Laparoscopic surgery following his Laparoscopic Colorectal surgery fellowship in Wales. He is also an accredited endoscopist internationally by JAG (Joint advisory group for endoscopy in England).

He was appointed as a national preceptor and trainer in Laparoscopic colorectal surgery in England in 2011. He has trained and assessed several consultants in this field. He is well known in international Laparoscopic and minimally invasive surgery forums. He has chaired many seminars and training workshops. He has been guest and keynote speaker at several international congress of minimally invasive surgery.

Research:
His areas of research have been chronic constipation and biological markers of cancer. He has presented and lectured in these areas and published in several peer review journals. He is on the editorial board of Annals of Colorectal research. He is also a reviewer for the British Journal of Surgery.