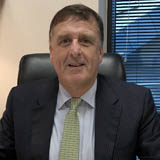 Current Positions
Having served as Chief of Surgery at UPMC Beacon Hospital from 2008 to 2014 Mr. Ó Ríordáin holds the posts of Consultant Colorectal Surgeon, Head of Colorectal Surgery and leads the Gastrointestinal Multidisciplinary Team at Beacon Hospital. Mr. Ó Ríordáin is Consultant Surgeon at Tallaght University Hospital in Dublin and Naas Hospital since 2001. He is Lecturer in Surgery at Trinity College Dublin and Assistant Professor in Surgery at University College Dublin.

Clinical Expertise
Mr. Ó Ríordáin’s major areas of surgical expertise are in Cancer of the Colon and Rectum and in Minimally Invasive Robotic and Laparoscopic and Transanal Surgery for colorectal cancer. Mr. Ó Ríordáin has extensive leadership experience in this area having initiated and lead the development of multidisciplinary colorectal cancer teams at the University of Leeds, Tallaght University Hospital and at the Beacon Hospital. His expertise includes major pelvic cancer problems including pelvic exentoration and recurrent rectal cancer. In addition to his Colorectal Cancer interest, Mr. Ó Ríordáin also performs robotic, laparoscopic, minimally invasive transanal, pelvic and perianal surgery for the spectrum of benign colorectal disease, including colorectal polyps, inflammatory bowel disease, diverticular disease and rectal prolapse. He performs complex benign colorectal surgery including restorative surgery for patients with complicated stomas and abdominal wall hernias and complex anal fistulae.

Mr. Ó Ríordáin has had a major focus on Minimally Invasive Surgery since the 1990’s and very extensive experience in this area. Having been to the fore in the development of laparoscopic colorectal surgery in Ireland in the early noughties, Mr. Ó Ríordáin has more recently lead the development of robotic colorectal surgery becoming the first accredited robotic colorectal surgeon in Ireland in 2017, and one of only 25 in Europe, through the European Academy of Robotic Colorectal Surgery (EARCS). He leads the Robotic Colorectal Surgery Programme at Beacon Hospital has the largest experience in the country and has recently published its outcomes in the Journal of Robotic Surgery.

Mr. Ó Ríordáin also practices as a general surgeon providing minimally invasive and day-care surgery for both elective general surgical problems, including hernias, gallbladder disease and gastro-oesophageal reflux disease and a full endoscopy service including colonoscopy and polypectomy. He provides an emergency on-call service in both the public and the private sector.

Education, Training and Experience
Mr. Ó Ríordáin is a graduate of University College Cork and having completed a Senior Registrar training programme in Colorectal and General Surgery in Ireland, and attaining Specialist Fellowship of the RCSI, he then moved to the United States for further senior clinical and research experience in Colorectal and Oncologic Surgery. Mr. Ó Ríordáin trained at some of the leading academic medical centres in the United States including The Mayo Clinic, Brigham and Women’s Hospital, Harvard Medical School and Memorial Sloan Kettering Cancer Centre in New York where he was awarded the prestigious and competitively awarded International Fellowship in Surgical Oncology, where he specialised in gastrointestinal oncology.

In 1998 Mr. Ó Ríordáin moved from the US to the UK, to take up the post of Consultant Surgeon and Senior Lecturer at St James’s Hospital in Leeds, a major teaching hospital of the largest NHS Trust in the UK, and at the University of Leeds Medical School. Here, Mr. Ó Ríordáin played a lead role in the development and organization of the Gastrointestinal and Colorectal Cancer Surgical service, Laparoscopic Surgery Programme and lead the development of the Multidisciplinary Gastrointestinal Cancer team. In 2001 Mr. Ó Ríordáin moved back to Ireland to the post of Consultant Surgeon at Tallaght University Hospital, Dublin.

Academic
Mr. Ó Ríordáin’s research interests include Colorectal Cancer, Multidisciplinary Cancer Care, Robotic and Laparoscopic Colorectal Surgery. He was awarded a Doctorate in Medicine NUI 1993 for his thesis based on research in surgical immunology. He has authored more than 60 peer reviewed scientific surgical articles and over 100 lectures and presentations to learned societies in Ireland and Internationally.

He takes an active involvement in undergraduate and postgraduate teaching. He is affiliated to the medical schools at Trinity College through Tallaght University and Naas Hospitals and at University College Dublin through Beacon Hospital.