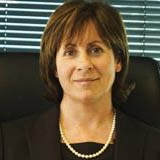 Dr. O’Riordan returned to practice in Dublin in 2001 having trained in Respiratory Medicine at the New England Deaconess Hospital and Harvard Medical School in Boston and at the Mayo Clinic in Rochester, Minnesota. She subsequently worked as a Consultant Respiratory Physician at Leeds General Infirmary, Leeds, U.K., before returning to Dublin.
Dr O’Riordan has been a Consultant in Respiratory Medicine at St. James’s Hospital and Trinity College Dublin since 2001. Dr. O’Riordan graduated from University College Cork in 1986, became a member of the Royal College of Physicians in Ireland in 1989, was awarded an M.D. by the National University of Ireland in 1993 and became a Fellow of the Royal College of Physicians in Ireland in 2004.
Dr O’Riordan’s special areas of interest include infective and inflammatory disorders of the lung., including asthma, sarcoidosis, pulmonary fibrosis, lung and pleural infections and bronchiectasis. Dr. O’Riordan has been providing a comprehensive Respiratory service at the Beacon Clinic and Beacon Hospital since early 2007. This includes outpatient assessment and review of patients with Respiratory symptoms and full investigation including pulmonary function testing and bronchoscopy as well as access to the state of the art diagnostic imaging services available at the Beacon Hospital. In addition to seeing patients at the Beacon Clinic, Dr O’Riordan regularly consults on inpatients at the Beacon Hospital and is a member of the multidisciplinary team providing rapid access to investigation and treatment for lung cancer patients at the Beacon Hospital.