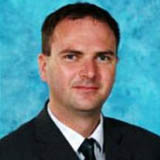 Prof Moloney graduated from University College Galway in 1993, and subsequently trained in Respiratory Medicine and General Internal Medicine (GIM) in University Teaching Hospitals throughout Dublin. He was awarded his Doctorate in Medicine (MD) from the National University of Ireland in 2002, and completed a European Respiratory Society Fellowship at the National Heart and Lung Institute at the Royal Brompton Hospital in London in 2003. He received his Certificate of Completion of Specialist Training in Respiratory and GIM from the Royal College of Physicians of Ireland in 2004.
Prof Moloney was appointed Consultant Respiratory & GIM Physician at the Sheffield University Teaching Hospitals in 2004 where he worked until 2007 when he was appointed as Consultant Respiratory & GIM Physician at the Adelaide & Meath Hospital, Dublin, and Peamount Hospital, Co. Dublin, and Honorary Senior Clinical Lecturer in Medicine at Trinity College Dublin.
Prof Moloney has been on the Irish Register of Medical Specialists in Respiratory Medicine & GIM since 2004, was awarded the Fellowship of the Royal College of Physicians of Ireland (FRCPI) in 2006, and the Fellowship of the American College of Chest Physicians (FCCP) in 2007. Prof Moloney has published over 20 peer-reviewed international papers, has co-authored 2 book chapters, and presented over 20 abstracts at international meetings on respiratory disease. His special interests include asthma, COPD, obstructive sleep apnoea, interstitial lung disease, and lung cancer.